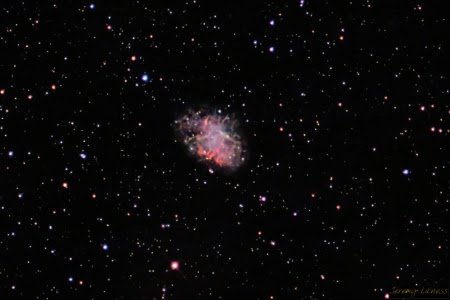 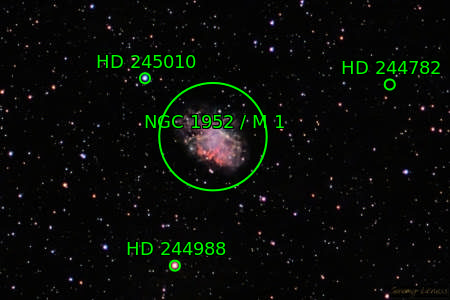 Objects visible in this photograph: M1, NGC1952, and some space dust.

Target was acquired from Monroe, WA.

🥇 1st Edition!
Metal Glossy White
12" x 8"
Every piece is personally signed and numbered and comes with a Bill of Sale and a signed Certificate of Authenticity. Currently, only the pieces on display are for sale. Pickup will be arranged at the close of the exhibition. We do not ship.
$120

This piece is on display at:

The first deep space object I photographed was M1: The Crab Nebula. I didn't realize it was the first item in Charles Messier's famous catalogue until after the fact. That image was noisy but just seeing the colors were enough to get me hooked. I later learned that the nebula is the remnants of a massive stellar explosion, or supernova, that was visible to Chinese astronomers in 1050 AD. It is expanding at such a rapid rate that modern images show differences when compared. I love the color and intricate details of this target.